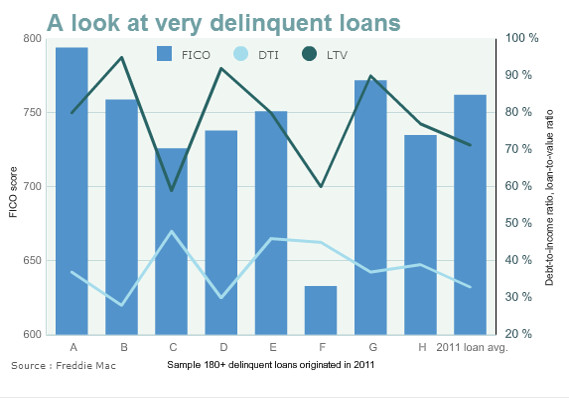 On March 22, Freddie Mac released a study with data pertaining to mortgages originating in 2011. According to a press release, the sample consisted of 50,000 fully amortized, fixed-rate, single-family, 30-year home loans backed by Freddie Mac, with the data indicating that “problem,” or delinquent, borrowers cannot easily be identified.

As you can see above, the chart lists delinquent borrowers’ FICO scores, debt-to-income ratios, and loan-to-value ratios, as well as, in the far right column, the 2011 average. The release specifies “delinquent” as 180 or more days.

For those following the mortgage industry, the data displayed serves as a basis for Freddie Mac’s decision to buy back loans. As a statement in the release describes, the company considers multiple factors in making these decisions, particularly as certain data is higher than national levels, and released the information to assist investors assemble accurate credit-performance models.

But, even if certain delinquent borrowers were above average, the data indicates many are in a more financially-risky place. For instance, the average FICO score for delinquent borrowers was 739 (the sample average is 762). Similarly, the average debt-to-income ratio is 39 percent and loan-to-value ratio 79 percent (the national averages are 33 percent and 71 percent, respectively).

As the release additionally states, having a low credit score or high debt-to-income or loan-to-value ratio is not always negative, however, as borrowers in both risky categories have managed to perform well.

As a reference point, a 2010 Associated Press piece details Freddie Mae and Fannie Mac’s buyback program. When announcing the news at the time, the two organizations stated they planned to buy back four months-plus delinquent mortgages, which were contained in securities and sold to investors.

For Fannie Mae and Freddie Mac, buying back these home loans was a better move than making guarantee payments on the securities. As the piece mentioned, Freddie Mac and Fannie Mae, as of 2009, had $70 billion and $127 billion, respectively, of such loans.